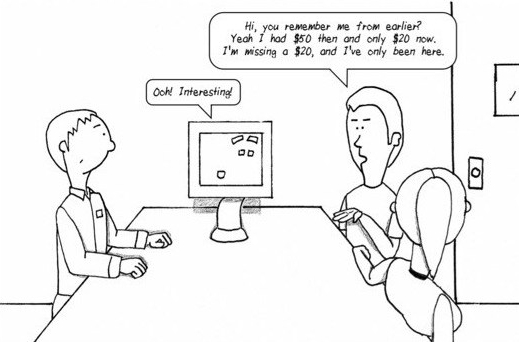 Yeah, because getting accused of theft is SO interesting.

Working in the service industry is…not fun. There are so many detractors: Poor pay, unstable schedules, lazy coworkers, useless managers, mind-numbing monotony, and so much more. Oh, and shitty customers. I don’t care where you work, you will find shitty customers. And it’s not just limited to retail and food service. If you deal with customers on a regular business, some of them will be assholes. It’s just the way it is. Some people are kind. Some are intelligent. Some are understanding. The rest are just jerks. Since it’s Throwback Thursday, let’s throw it back to that time I got accused by a customer of stealing twenty dollars from him.

That’s right, a whole twenty dollars. I don’t know why I thought about this the other day, but this event came flooding back to me. This was three years ago, and even today, it makes me angry.

It started innocently enough. He bought an item that ended up being under $10 with tax. I can’t remember what that item was, not that it matters. To pay for it, he pulled out a twenty dollar bill and handed it to me. I had begun to punch it into the computer when he stopped me, having just found a ten dollar bill. Then, and I remember this vividly, I handed him the twenty and took the ten, gave him his change, and he left. End of story.

He comes back an hour or so later, trying, and failing, to avoid sounding like he was accusing me of theft. He said something along the lines of, “Yeah, you remember when I was in here earlier? Well, when I was here, I had two twenties and one ten, but now, I only have one twenty, and I haven’t been anywhere else but here.” When I heard that, I knew the road he was leading me down, and immediately, I was incensed.

Prior to this moment, I had never been accused of theft. I was incredulous, though I understand now that this moment was merely a product of the ego of the shopper, this massive I-can-do-no-wrong mentality, born out of the old “The customer is always right” philosophy. (Consequently, if I ever met the man who first thought that up, I’d kick him square in the family jewels, because he’s earned it.) More often than not, the customer is an idiot. They come to your store to buy a certain product, and along the way, they will need to have one or more of these things done for them: Led to the product, explained the product, explained the difference between similar products, shown the price tag, explained the return policy, told the hours of operation, shown how to operate the exit door, and that’s not even the full list.

(For the record, no one is impervious to this. I have made some of these errors before, personally. It happens. I’m speaking more about the people to whom these things happen constantly and repeatedly. Redundant? Maybe, but so is dear customer.)

So, when the customer is catered to in such a manner, they feel special, which is good, but that eventually leads to entitlement, which is bad. In this age of social media, it’s remarkably easy to smear the name of any given business for even the tiniest of infractions, real or imaginary; and lamentably, far too often to businesses acquiesce to these shitty shoppers who believe that every single pathway to their personal happiness should be exhausted by the store’s management team.

Anyway, having explained this probably too much, you can see now why the thought that maybe he misplaced it along the way never even occurred to him and the thought that I as a thieving asshole was instantly and infinitely more plausible than him being a forgetful human being. So, my defense became my offense: I was going to make him make his intentions brutally clear and beat him back with complete, brutal honesty. I was going to turn the dial up to 11, because I was bitter, I was offended, and I was tired of dealing with their shit. All over twenty dollars.

He pressed his case, that when he had given me the ten, I did not return the twenty and pocketed it. “Excuse me?” I said in as incredulous of a tone as I could muster. And this is the only thing that makes me giggle about the incident: He insisted that he wasn’t accusing me of stealing…while accusing me of stealing. He said, “I’m not accusing you of anything,” three times, and every time, I responded with, “Yes, you are.”

So, dial fully to 11, I turned out my pockets. No twenty. I opened my wallet. No twenty. I counted out my fucking till. No twenty. (That last one was the cherry on top of my sundae of crazy. He had been my only cash sale to that point that day, so the total in my till came out to me $159 and whatever change was left from his transaction, and fuck, did that feel satisfying.)

Have you seen Ant Man, yet? Ya know how he is able to shrink himself to microscopic size? Yeah, that’s what happened to this Shopper. He nearly vanished from sight when he realized what he had done, which was somehow lose his own money and be a complete ass to another person who had done him no wrong. I didn’t even get a proper apology, merely a “Sorry” as he slinked on out the door. I shouldn’t have expected any less than that from a Shopper, but I expected better from a human. (But a good chunk of the people in this country are complete garbage anyway, so I shouldn’t be that surprised anyway.)

I think one of the things that still bothers me the most about it is the incredible stupidity of this Shopper in thinking that 1. I would risk my steady, decently paying job to swipe twenty bucks from him. Why. The fuck. Would I. Do that? Seriously? Why would anyone think that would work? Why would anyone think that would be worth the time and effort? If you’re going to do something that stupid, you don’t do it over twenty dollars. Unless you’re a kleptomaniac. Or just that bored. Honestly, I’d rather be bored, as long as there’s a steady paycheck involved.

It all reminds me of a maxim I learned in my childhood about giving cookies to mice that basically amounts to “If you give them an inch, they’ll take a mile.” Or something like that. Maybe I misunderstood that book. Regardless, that’s how Shoppers operate, at least. Show them the tiniest concession, and they’ll try to get every gimme they can. The worst of these gimmes is a discount. The second worst is a return or exchange. (More on that another time.)

It also reminds me of a more recent incident with a Shopper who would not let go of the fact that we would not accept a return on a chart and without a receipt, but that’s definitely a post for another day.

I’ll close with this: Check yourself before you wreck yourself, and as always, be kind to service industry workers. We’re remarkably creative at making your life much more annoying.

11 thoughts on “Throwback Thursday: Wild Accusations; or, Why the Hell Would I Risk My Job to Swipe Twenty Bucks From You?”