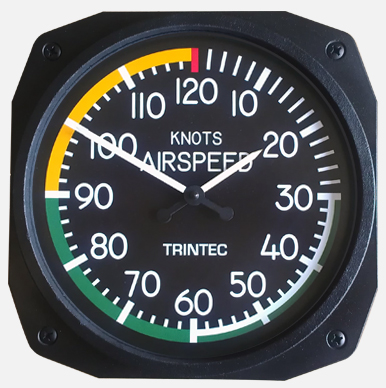 Didn’t think this was that hard to figure out, yet here we are.

I work, therefore I stare at a clock all day. In retail, I’m sure we do it more often than other occupations, often to our own doom. It’s a widely recognized fact that observing the clock instantaneously slows down the rate of the passage of time, causing the following hour to last three times its normal rate.

Perhaps somewhat ironically, we often sell clocks. Not every store does, but many do. Mine does. Ours are all aviation-themed, from clocks with warbirds on them to clocks designed to look like avionics. The other day, I sold one such clock, which resembled an airspeed indicator (ASI). These types of clocks are the most popular among our shoppers, and I completely understand why. The idea is intriguing, the design is sharp, and the colors are bold. They’re attractive clocks, and they really grab the attention of a pilot.

The shopper in question was only there to buy novelty items. He walked out with two t-shirts and the ASI clock. However, he was concerned that it would function properly as it had no battery and only two hands. I put a AA battery in the clock and watched as it slowly ticked. Yet, his concern persisted.

“But what if it doesn’t work?” he asked, clearly having never dealt with a retail store before. I then briskly explained how return policies work. Two hours later, I receive a phone call from that same shopper:

Him: The long hand, yeah, it’s not a minute hand; it’s a second hand.

Him: Yeah, it’s a second hand. It ticks every second.

Me: Yes, that’s how it’s supposed to be. Since it only has two hands, it’s a minute hand that advances every second.

Him: That’s a second hand.

Me: No, sir. It performs both functions since there is no second hand.

Him: There is a second hand. There isn’t a minute hand, though.

Me: (phone muted) The hell is this guy on about? (phone unmuted) No, sir. There is a minute hand and an hour hand.

Him: Umm, well, I don’t think that’s right. I think I’m just going to bring it back.

But beyond anything else, this is a perfect example of one of the most constant and strong of shopper tendencies: Stubbornness. The shopper has a tendency to ignore the informed opinions of those who work around these products and just go with their original preconceived ideas regarding the products they seek. If it looks like two hands when it should have three, anything less than three will feel incorrect, despite the fact that the reality of the situation is actually different from what they have secured in their minds. Why listen to us? We just work here in constant contact with these products every day. I mean, what do we know anyway?

Which brings me to another customer I had come to me recently. He was preparing for a check ride. For any comrades out there unfamiliar with aviation training, each certificate and type rating for airmen generally consists of three parts: written exam, oral exam, and practical exam. There are prep books geared toward each portion. The check ride is when an FAA-approved examiner administers the oral and practical exams to an applicant.

So, I showed this shopper to the two books he would need: the oral exam guide and the airman certification standards. He opened up the latter and began flipping through it. It’s all written basically in codes which are explained in the first few pages of the book, which he ignored, despite my insistence that they would provide the information he needed. Instead, he just said: “Nah, I don’t think I need that. I’ll pass.”

No need to listen to me. I’ve only been in the aviation field for five years now. What do I know?

8 thoughts on “The Hands of a Clock”