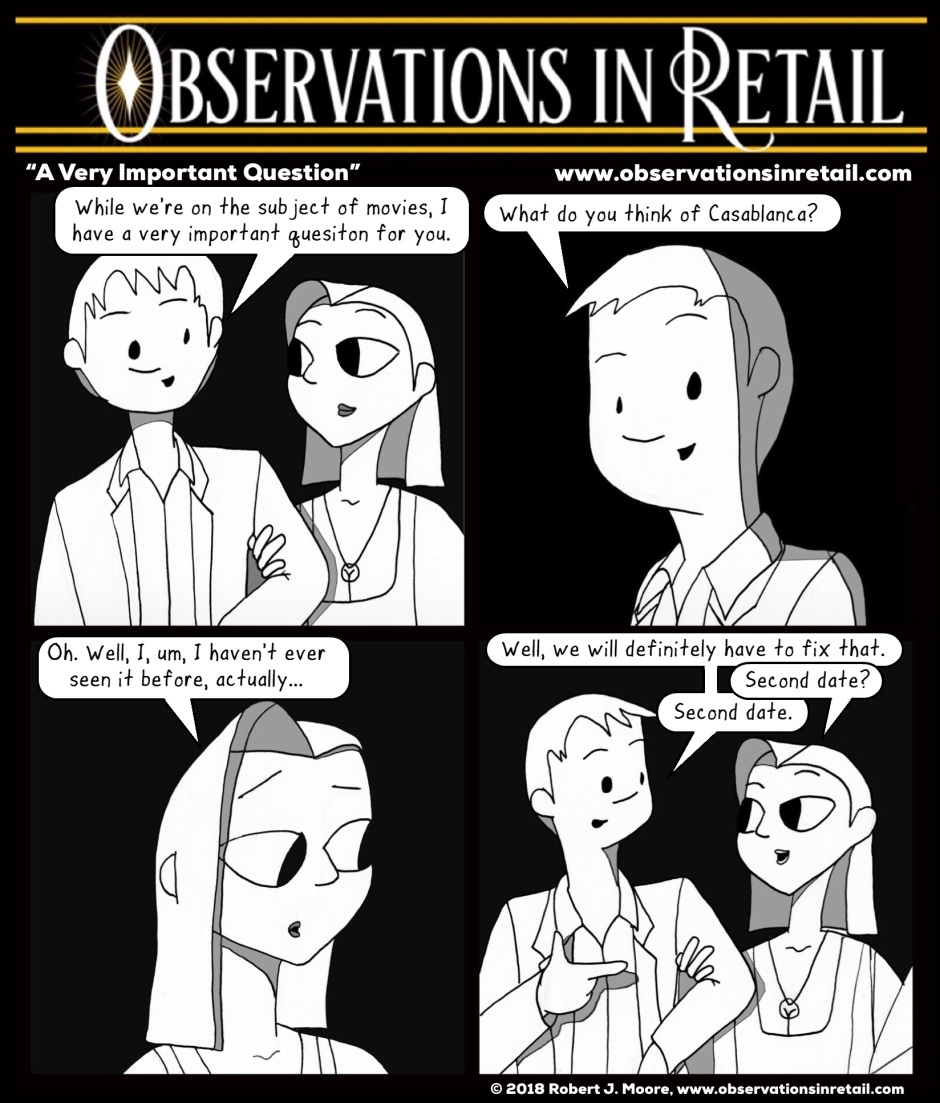 This is a very important question indeed.

Casablanca is far and away my favorite movie of all time. I still remember the first time I ever saw it. We had an old VHS copy (Google that if you don’t know what that is) in the closet, and I had always heard it was good, so I popped it in one day on a whim while I nibbled on some cookie dough (yeah, I’m weird; get over it), back when I had the metabolism of a hummingbird. From that moment on, my life was different. I can delineate clearly a time before I knew Casablanca and everything that came after that moment. I was enraptured, infatuated, with it. So much so that I still use it as a requirement for friendship with me. I’m not even kidding; I make all my close friends watch it at least once. It’s that good.

Those of you out there reading this who might be cynically thinking, “Well, it can’t be that good.” I know that there is a general stigma sometimes toward not only older films but also to older films who appear on critics’ “best ever” lists. AFI once ranked this film #2 behind Citizen Kane, which is another phenomenal film I highly suggest checking out. But there’s a damn good reason why Casablanca stands up so well. I could write an entire post on this film (maybe I will), so I won’t go too far down this rabbit hole, but I’ll leave you with this: Give it a chance.

It’s an older film, yes, but that doesn’t mean jack shit, really. It does nothing to diminish the simple beauty of the score, the intimacy of the set pieces, the power of the performances. Like properly stored wine, age only enhances it. The story is timeless, and it’s well worth a viewing, if for absolutely no other reason than for the quotes. I mean, who doesn’t know the line, “I think this is the beginning of a beautiful friendship”? Or “Round up the usual suspects”? Or “Here’s looking at you, kid”? Or “Play it again, Sam”? (Even though that line is never actually uttered in the entire film. “Play it for me, Sam,” is though. It’s just been botched to hell over the years.) Really, I think the film is worth watching for the “La Marseillaise” scene alone.

But it’s a timeless classic for a fucking reason. It’s rock solid, and it resonates deep within you. Please, give it a watch, if you ever get the chance.

23 thoughts on “A Very Important Question”